Two aesthetic pruning goals come to mind when I am asked the following question:

“How do you know what branch to cut?”

That is the most frequent question I am asked when I am pruning anything at the garden.  I can usually complete the sentence for them after the first three words.

My usual smart alack response is “Well, the first one I cut off is the dead one.”

Probably not the most helpful I know, but it is actually true.  There is a sequence of different types of branches to prune when performing aesthetic pruning of trees and shrubs. Before I go into that sequence, I would like to discuss aesthetic pruning goals for our garden sanctuary.

Obviously there are different shapes that plants can and should be pruned into.  What shapes and thus pruning cuts you make, depend upon what your goals are.  I am going to suggest two goals to have for aesthetic or if your prefer artistic pruning of trees and large shrubs in your garden sanctuary. 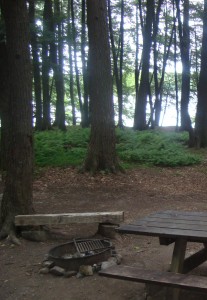 This is often one goal of pruning in a Japanese garden.  If all the plants look like they are much older than they really are, it imparts a feeling of the space having a been there a long time. This imparts a feeling of stability, reliability and safety in us.  Those feelings help to calm and relax us.

Think of going camping in an old forest.  Sitting next to a campfire underneath 100 year old pines, beechs or hemlocks is certainly a different experience than doing the same thing under 25 foot tall maples that were planted 15 years ago.

The shape that best imparts a feeling of the plant being old is what the plant would look like when it was mature. This actually makes sense (finally, how many blog posts did you have to read to get to one that did that?)

One example would be a pine tree such as a Limber pine. When they are young, they mostly grow straight up.  Once they get to a height and age they are comfortable with, they start spreading out.

The next best shape to impart that aged feeling is making the plant look like what we generally consider old trees to look like. Perhaps you don’t know exactly what a 50 year old lilac bush would look like, or perhaps you know and don’t particularly like how that plant looks when its old.  Lilacs become a tall mass of live and dead branches with flowers only on the top of the plant, 15 feet above the ground.

How about you prune it into a wide spreading form with zigzagging branches that looks like an old small tree instead?

Here are some characteristics we often associate with older trees

The second goal we often have in aesthetic pruning is keeping our plants smaller than they normally would get.  Sure you might want an old looking tree, but do you really want a 80 foot tree in your yard?  What if it could instead be 20 feet tall but still impart the feeling of being mature?

Well for one thing, you could probably care for itself instead of having to hire an arborist to prune it.  Another key benefit for gardeners is that you could fit more plants in your garden.  This would allow you to have more variety of trees which could give several benefits:

So those are the two primary goals of aesthetic pruning as I see it.  Sure there are other considerations, such as maximizing flowers, protecting the health of the tree, etc.  In general however, I think making the plant look like a smaller version of it’s idealized mature shape is a good goal to have.

Next post I will continue on this theme and give you a partial answer to the question “How do you know what branch to cut?